With the proliferation of smart devices that include all sorts of sensors (like temperature, smoke, motion sensor etc.), the notion of smart home has emerged over the decade or more. Since then, vendors like Google, Homey, and Samsung have introduced several smart home packages for supporting several use cases for inhabitants of smart home. However, despite the development of hundreds of smart home devices, the adoption rate for home automation is low. Among several reasons, that following are very prominent;
1) Current smart home solutions allow inhabitants to define behaviors of smart devices in if-this-then-that style fashion which requires some expertise in computation to translate high level goals to an algorithmic level. As many inhabitants are not trained for this interaction paradigm, they limit themselves to few common use cases or follow the vendor advertised use cases.
2) The information provided by vendors on their websites does not help inhabitants to translate their high-level goals to useful scenarios. For example, one cannot anticipate a useful scenario by looking at the devices alone, rather one needs a combination of devices and a scenario that can be fulfilled with those devices.
To overcome the above issues, our objective in this research is to provide inhabitants with several meaningful and classified use cases to inspire and motivate them using human computation. Moreover, our approach can also be repurposed by IoT vendors and distributors for supporting end-user facing services.
First Milestone
Our Late Breaking work entitled: How Creative is the Crowd in Describing Smart Home Scenarios? Has been accepted at CHI’18. 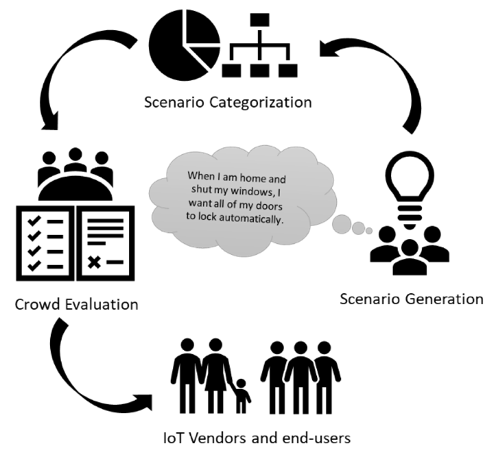